Refresh With "Legs Up The Wall" Pose! [VIDEO] 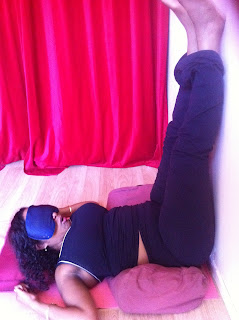 I give you permission to chill out.

Enjoy this restorative posture to re-fresh your mind, body and spirit for your Fall fresh start.  Shifting your body for the seasonal change.  In this pose we are practicing what yogis refer to as "deliberate stillness." We give the mind and body a chance to integrate and also let go of the past. If you have trouble sleeping soundly, practice this pose before going to bed or if you cannot fall back asleep.

Check out the Yoga Flava Video Snack For A Taste of "Leg Up The Wall" Pose:

How to Practice: Place a bolster or two folded blankets about 2 inches away from the wall. Sit sideways on the bolster so your right hip and side are touching the wall. With the bolster under your bottom, lower yourself back, using the support of your elbows and forearms, and swivel around to take your right leg and then your left leg up the wall. Stay in the pose for 10 minutes or longer. If you are tired, it is natural to fall asleep in this pose. When you are ready to come out, bend your knees, turn to your side, and relax on the floor for a few more breaths before you slowly sit up.

Posted by YogaFlava@gmail.com at 6:47 AM No comments:

Let The Leaves Swirl, Not Your Thoughts During Fall 2011

By Margaret Burns Vap for Atletica

The fall season has always felt like a better opportunity for a fresh start than the New Year. First of all, you arrive at autumn from summer, which is typically a more relaxed precursor than the holidays. Second, there’s something about the crisp cool air, the cozy clothing, the warm apple cider and pumpkins that evokes freshness. It’s a great time to make some changes and clear your head.

Cue Yoga Sutra 1.2 yogaś citta-vṛtti-nirodhaḥ: Yoga is the cessation of the fluctuations of the mind.

YOGAŚ CITTA VRITTI NIRODHAH, shown in Sanskrit above, is from the Yoga Sutras authored by the ancient sage Patanjali. The Yoga Sutras are the guidebook of classical or Raja (royal) yoga. Written at least 1,700 years ago, the Sutras are made up of 195 aphorisms (sutras), or words of wisdom.

The power of philosophy lies in its application to our everyday lives, the ‘a-ha’ moment when the esoteric suddenly makes sense. Many yogis shy away from the philosophy behind yoga because they only find the asana (physical poses) relevant and beneficial. And I’ll admit, cracking open Patanjali’s Yoga Sutras isn’t exactly easy reading. Well, it’s fall, so even if you’re not officially back to school, why not delve into a bit of yoga philosophy to deepen your practice, and discover your own a-ha moment to apply both on and off the mat.

What is the ultimate goal of yoga? (And if the first thing that comes to mind is “a yoga butt”, definitely read on.) The textbook yoga philosophy answer is Samadhi: bliss, supreme consciousness, enlightenment. Completion of the eighth and final limb of yoga (read more about this under “What is yoga anyway?” here), when the yogi has left behind all struggle and doubt. However, Wikipedia offers this definition, which is more in line with my own personal philosophy, and which makes the concept of Samadhi easier to grasp: “According to Vyasa, a major figure in Hinduism and one of the traditional authors of the Mahabharata, ‘yoga is samadahi’. This is generally interpreted to mean that Samadhi is a state of complete control (samadhana) over the functions and distractions of consciousness.”

So, to answer the question of what is the ultimate goal of yoga, we really don’t need to go far from the simple sutra (and therefore one of my faves), yoga is the cessation of the fluctuations of the mind. The ultimate goal of yoga can be incorporated into your daily life; everyday through our yoga practice we are able to experience a taste of this peace of mind. Some days it won’t happen, and most times it will only be fleeting – we may not even notice until long after – but the possibility is enough to keep us coming back to our mat. Think about how hard it is to dwell on your never-ending to-do list when you are trying to balance on one foot in vrksasana, tree pose. When you balance here, your mind clears and you get a taste of your own Samadhi.

These small experiences we have with peace positively affect our lives and lead to bigger experiences and effects with time; simply put, it all adds up. If we try to assign one all-encompassing goal to yoga, we’ll only get discouraged because it’s too darn lofty and unattainable, as is “perfect” Samadhi. Yoga has worked for thousands of years because the goal is actually within everyone’s reach, every day.
Put this philosophy into practice on your mat this fall, and stop your mind from swirling with yoga. Even if it’s only for a minute, those minutes will eventually add up.


Get A Fresh Start For Fall - Yoga Flava 10 Week Fall Series
Posted by YogaFlava@gmail.com at 1:54 PM No comments: