I'm sooo excited. This has been an amazing time to return to my hometown with Yoga Flava TV on African Caribbean Television Satellite Network! I look forward to bringing you all of the Yoga news from this event with Flava!

( BPRW) African Americans Benefit from Yoga
(BLACK PR WIRE) (April 22, 2009) “Cardiovascular disease, including stroke, is the leading cause of death for African American men and women, killing more than 102,000 annually,” according to the American Heart Association. Diabetes, hypertension, obesity and other issues are at the forefront concerning African American health. African Americans are responding by attempting to eat better and be more physically active. Unfortunately, many African Americans are overlooking an ancient practice that could be beneficial in combating health-related ailments; namely, yoga.

According to The Gale Encyclopedia, yoga is a system that benefits the body, mind and spirit by teaching self-control through a series of postures (asanas) and exercises, as well as through breathing (pranayama), relaxation and meditation (dyana) techniques (Bruno, 1999). When combined with a nutritious diet and other cardiovascular activities, such as running and aerobics, yoga can contribute greatly in improving one’s health. According to medicinenet.com, practicing yoga can help lower blood pressure, decrease stress and help reduce symptoms associated with depression and anxiety. Yoga can also help lower blood glucose levels (as with diabetes), increase strength and flexibility, and reduce some symptoms of asthma.

Yoga is also relatively inexpensive. A reasonably priced studio ranges from ten to twenty dollars a session, but one can purchase DVDs and practice at home for far less. Yoga props, mats and blocks are also sold for decent prices at local stores, such as Target and Wal-Mart. Yoga is one of the most beneficial exercises that African Americans can do to combat health issues, and with effort, African Americans will see results.

Pre-production for New Yoga Flava Shows For African Caribbean Television - in the mean time here is a taste from the past...

Posted by YogaFlava@gmail.com at 8:37 AM No comments:

Yoga Flava now airing on ACT every morning at 7:am on Galaxy 19, Channel 6 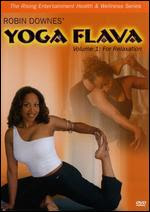 Posted by YogaFlava@gmail.com at 4:21 PM No comments: